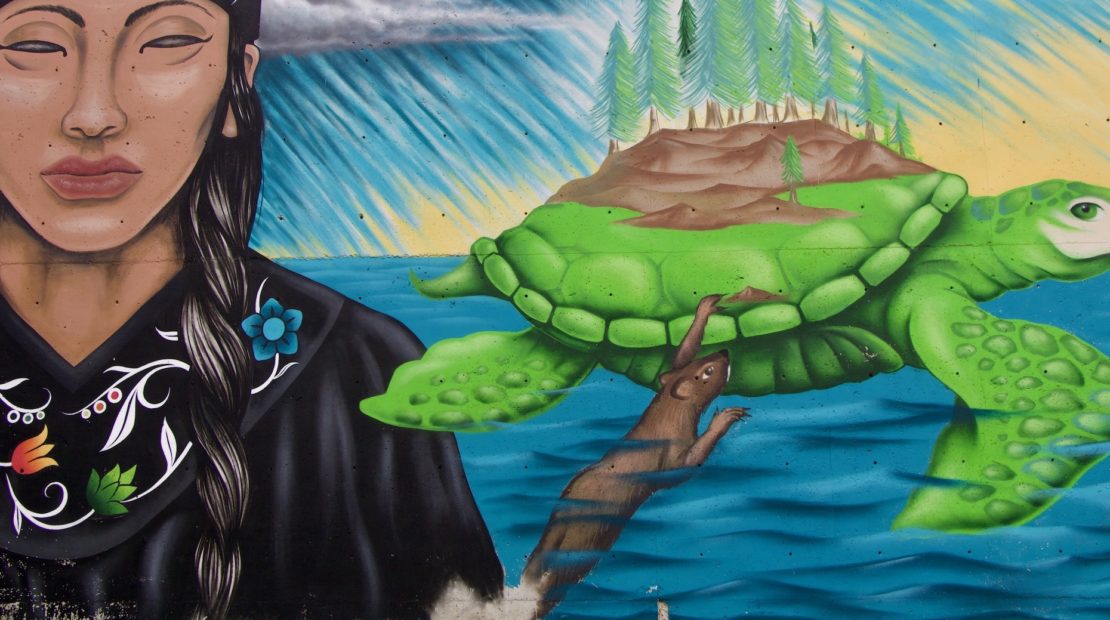 As we look toward the start of Native American Heritage Month in November, we’ve been thinking a lot about the importance of Indigenous representation and visibility. Unfortunately, many of our major institutions–from pop culture to government–exclude modern-day Indigenous voices (or only choose to highlight them during months like November). Exclusion leads to invisibility, further fueling the creation of damaging myths about Native people.

Indigenous people are tackling invisibility and stereotypes head-on through the Native narrative change movement. Based in authenticity and truth, the movement seeks to create change across sectors through accurate representations of Indigenous people. Native people are creating this new narrative, one that’s strengths-based and grounded in Indigenous realities, past and present. We encourage you to check out our video on the Native narrative change movement to learn more.

When it comes to the benefits of having Indigenous representation at the federal level, there are many. We’ve selected a few big categories to highlight:

Decisions and their impacts on Native nations

Native nations are sovereign, independent nations, yet decisions made at the federal level often directly impact their lands and citizens. Obvious examples include infrastructure projects like oil pipelines, dams, upgrades to roads and bridges, and wastewater and sanitation system maintenance.

Decisions impacting Native nations go beyond just infrastructure. Think about the fact that the names of many “federal lands” still contain derogatory, racist terms: what kind of message do these names send to Native people? The USDA’s history of agricultural lending practices is another great example. For decades, the USDA enacted discriminatory policies under the Farm Loan Program, excluding Native farmers and ranchers from crucial funding.

Unfortunately, federal lawmakers and officials don’t always consider the impact their decisions will have on Native nations. Federal agencies should honor Native nations’ sovereignty and consult with nations potentially impacted by a decision on a government-to-government basis. This usually doesn’t happen, or if it does happen, the process is typically not consultative. Having more Native people in decision-making roles can lead to a greater respect for sovereignty and the need to maintain nation-to-nation relationships.

The federal government has an ongoing obligation to provide Native people with access to healthcare and education, among other treaty-guaranteed rights. Sadly, the United States government has a long history of failing to deliver on these promises.

To illustrate, Congress has consistently underfunded Indian Health Service (IHS), the agency created to provide healthcare to Native people. This underfunding forces IHS administrators to limit the services offered. According to the National Congress of American Indians, Indian Health Service funding would have to nearly double in order to match the level of care provided to federal prisoners.

A side note: Although education is a treaty right, many people falsely assume that Native people receive free college tuition. Some colleges and universities have started to offer free tuition and tuition discounts to Native students. These tuition programs recognize the fact that colleges and universities are located on stolen land and have historically harmed Native students.

The federal government as trustee

The federal government serves as the trustee for Native lands, currently holding about 56 million acres of land in trust for Native nations and people. The trust relationship also impacts natural resources: In many cases, Native nations and people cannot develop natural resources without first receiving permission from the federal government. The current trust relationship dates back to the United States Constitution and was later clarified through a series of Supreme Court Cases known as the Marshall Trilogy. The federal government has a “fiduciary responsibility to protect Native American assets and resources.”

Unfortunately, the federal government has repeatedly failed to live up to its trust responsibility. Examples include underpayment of royalties related to land owned by Native people, committing major administrative errors, and mismanaging natural resources, among other issues. Appointing more Native people to federal roles can help ensure federal policies are enacted fairly and equitably.

Since taking office in January 2021, President Joe Biden has nominated a historic number of Native people to high-level positions within the federal government, in addition to federal judges. Many of these roles have never before had a Native American appointee. We’ve highlighted a few below:

Deb Haaland, Pueblo of Laguna, became the first Native American to serve as a cabinet secretary when she was sworn in as secretary of the U.S. Department of the Interior in early 2021. Since taking office, Haaland has tackled issues related to Missing and Murdered Indigenous Women (MMIW), accountability for Indian boarding schools, derogatory place names, and Bears Ears National Monument, among many other topics. The Department of the Interior has a long history of perpetuating genocide, systemic racism, and white supremacy; Haaland’s nomination is a positive step forward.

Marilynn Malerba, lifetime chief of the Mohegan Tribe, was selected by President Joe Biden to serve as US Treasurer in June 2022. She is the first Native person to serve as Treasurer, and she’ll also become the first Native woman to have her signature appear on US currency. As part of her duties as Treasurer, Malerba will oversee the Treasury’s new Office of Tribal and Native Affairs.

Jaime A. Pinkham, Nez Perce Tribe, was selected by the Biden administration to become the Principal Deputy Assistant Secretary of the Army for Civil Works in 2021. The Army Corps manages coastlines and bodies of water, in addition to permitting for pipelines, dams, and wetland construction. The Corps oversees many projects directly impacting Native lands and Native nations’ efforts to mitigate the effects of climate change. To hear more from Jaime Pinkham about the importance of representation, register for our upcoming event on November 8, 2022.

Zach Ducheneaux, Cheyenne River Sioux Tribe, is the first Native person to lead the USDA’s Farm Services Agency. As mentioned above, the USDA has a long track record of discrimination against Native people and nations; Ducheneaux’s appointment is especially significant. The Farm Services Agency manages disaster and loan programs. Ducheneaux brings a lifetime of experience advocating for Native producers to the role and plans to leverage that experience to address the Agency’s internal issues.